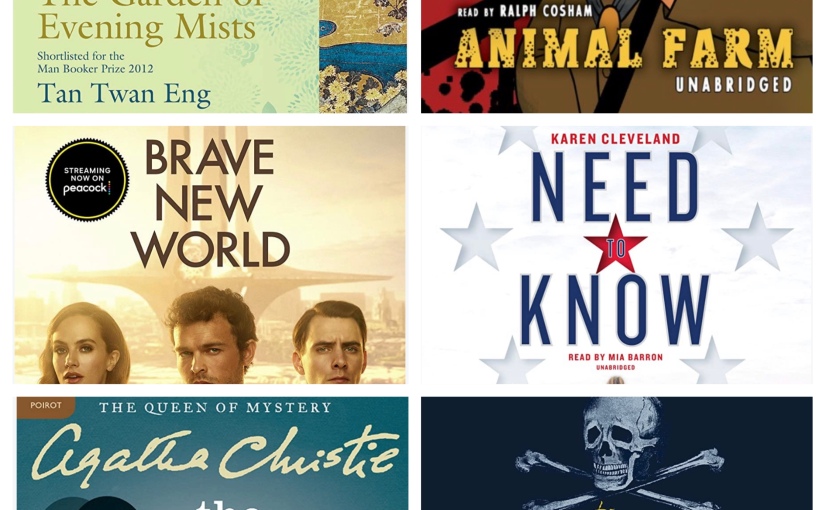 It’s was a whirlwind of a spring for me and from the looks of it, I had my head in a book or audiobook most of the time. Not a bad place to be actually. I counted up 14 titles in April and May – averaging 7 titles per months sounds about right. I have started to read – yes, with my eyes – more. It seems all this listening to books is having a positive effect on my ability to read. There was a time not too long ago where I had a tough time staying awake when I tried to read. Reading before bedtime, for someone who traditionally always struggled as a reader, is not a good time to start trying to build a new habit. I think that’s why I gravitated to the audiobooks. I love the freedom they give me, allowing me to be drawing or outside weeding in the garden with headphones on. I have been able to listen to fantastic works which previously I was too intimidated to attempt because reading has been a lifelong struggle for me. I’m a slow reader, although I must admit I am finally picking up my pace — after 50 years! Slow and steady…

The mind forgets but the heart will always remember. And what is the heart’s memory but love itself?

The Garden of Evening Mists by Tan Twan Eng

When I left off last post, I had already started The Gardens of Evening Mists as per the recommendation of my cousin who had learned about the book from her step-mom, also my Aunt. I am thankful the family grapevine brought me this book recommendation.

The Garden of Evening Mists is beautifully written by Tan Twan Eng and narrated by Anna Bentinck and runs 15 hours, 37 minutes. The descriptions of the Japanese garden of Yuguri will transport you to the Cameron Highlands of Malaya. But this book goes so much deeper than that. The characters are full of depth and each have their own individual stories which weave together in a story of love and survival during the Japanese occupation of Malaya. I highly recommend this book anyone interested in historical fiction or Asian culture. 4 Stars.

With everything going on in the United States of late, I had to re-read this great classic by Mr, George Orwell. I found Animal Farm to be as thought provoking today in 2021 as I did when I read it in high school in the early 1980s. I actually feel I have an even better understanding of what exactly George Orwell has been trying to warn us of through his illustrative tale.

I highly recommend either reading or re-reading or listening to Animal Farm. This classic withstands the test of time. Orwell is such a master of words and conveys so much in such a short succinct story. 101 pages which everyone should read or just over 3 hours to listen to – either way time well spent!

Words can be like x-rays if you use them properly — they’ll go through anything. You read and you’re pierced.

I stayed on the theme of dystopia with Aldous Huxley’s Brave New World. The title has come up as recommended reading by a couple of authors in my Masterclass courses: Atwood and Patterson, so I thought now was as good a time to revisit it. I listened to the free version which is offered with my Audible membership which is an 8 hour unabridged version but is narrated by Michael York. I have come to the conclusion that I don’t really enjoy listening to Michael York read to me. As for Huxley’s story, I highly recommend reading this book. It’s good even though it’s disturbing how prophetic is seems Huxley has been. I think Brave New World is a book that may need to be read, digested, re-read, digested, and not given over to someone else’s interpretation whether it be visual or even auditorial. It’s all in the words which when you read, you are pierced. 4 Stars Story, 1 Star Narrator.

My father and I have been talking more about the books we are reading and he recommended Need To Know by Karen Cleveland. He raved about how good it was and how much he enjoyed reading it. The Audible version is unabridged and narrated by Mia Barron who was excellent and runs for 9 hours and 39 minutes. After finishing Need to Know for myself, I thought that I just listened to an episode of the television show The Americans. Not that that’s bad, I liked that show and thought my Dad would like it too, if he watched something other than sports. Need To Know ultimately is an entertaining spy-thriller that would appeal to readers of that genre. A perfectly good beach read at 3 stars.

Still in the mood for mystery, I decided to check in with one of the classics that was recommended to me in one of my Masterclass writing classes. Specifically, The Murder of Roger Ackroyd by Agatha Christie had been recommended by Margaret Atwood as an excellent example of a first person narrative. It was and is an magnificent recommendation too that I give 5 stars! Agatha Christie is the master of mystery and The Murder of Roger Ackroyd is another piece of evidence in proving that case. The narrator, Hugh Fraser is the perfect storyteller for this story. If you are a fan of a good mystery – check this one out!

“The truth, however ugly in itself, is always curious and beautiful to seekers after it.”

Changing gears completely, I switched over to something that held some history and adventure with The Republic of Pirates:Being the True and Surprising Story of the Caribbean Pirates and The Man Who Brought Them Down by Colin Woodard, narrated by Lewis Grenville.

I have always been intrigued by pirates since I was a young girl. However, other than what I had seen in movies and via Disney, I realized I knew nothing about them, Until now. I loved learning the true history and story behind the Caribbean Pirates. The book is well researched and the way Colin Woodard weaves in real dialogue with the factual stories is well done. 5 stars!

I have so many more books to discuss, but I think this is a good place to take a pause. So look for more book recommendations in my next post Readings and Listenings – May 2021. If you are on the website Goodreads you can follow my reviews on my Goodreads.